With gasoline prices sharply rising with no plateau in sight, some truck owners may opt to keep their vehicle with the least ideal MPG rating parked at home until the pain at the pump starts to subside. While we all keep an eye on the fluctuating rates at the gas station, it’s only natural to wonder how things are on the other side of the fence. 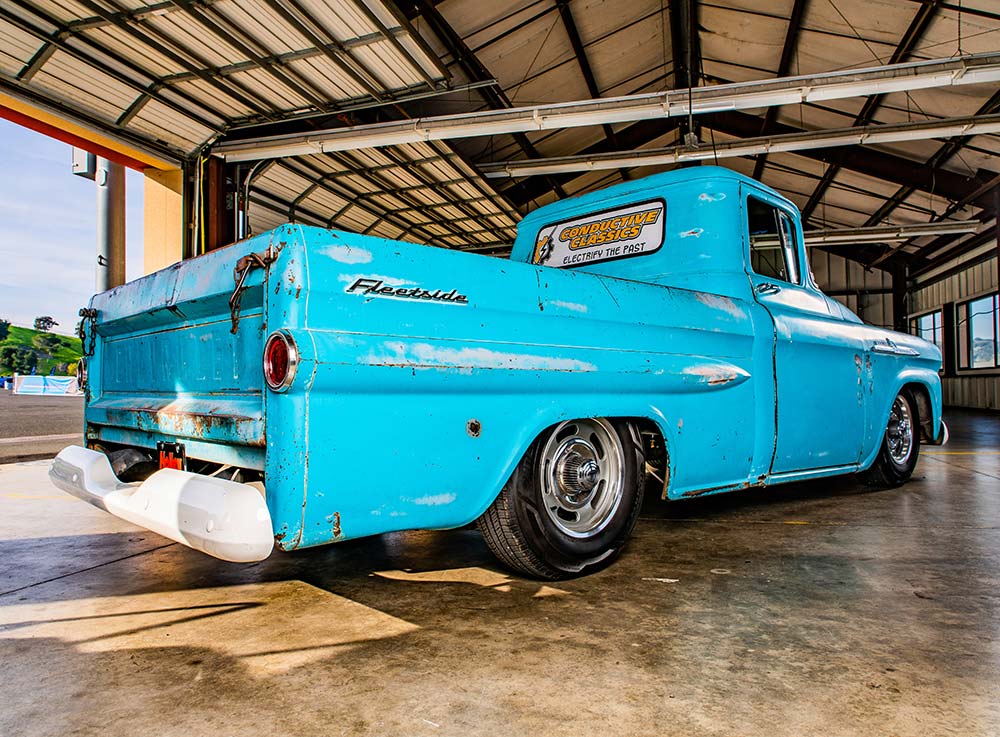 In theory, electric vehicles sound so easy to use—just plug it in, charge it up and go, right? Well, for the most part, that’s the general gist of how they operate, with a few differences here and there. Drivers who are fine with cruising around in cars that might not exactly be considered “lookers” (with the exception of a few Tesla and Rivian models), EVs are great for saving on fuel. For those who prefer pickup trucks, however, the selection of electric vehicles drops dramatically, even though there are a rising number of the big manufacturers addressing the demand.

What about electric classic trucks though? Old vehicles and the scent of burning gasoline go hand in hand, it really would take a complete ground-up project to explore what a fully electric drivetrain could look and feel like.

EVs are great for saving on fuel. For those who prefer pickup trucks, however, the selection of electric vehicles drops dramatically, even though there are a rising number of the big manufacturers addressing the demand.

Enter Shane Rolph of Garden City, Idaho, who just so happens to be the general manager of Conductive Classics—an automotive performance shop that specializes in converting vintage cars and trucks from gas to electric. The guys were looking for a break from the norm and found a niche that is currently spiking in interest and importance these days.

“We wanted to venture into the whole EV thing with this Chevy pickup while still keeping everything else about it a classic,” Shane says.

The Conductive crew began putting some ideas together to see what they could do with the ’58 Chevy Apache that Shane was able to get his hands on. Of course, the main objective was to ditch the truck’s original fuel system for a newfangled electric motor instead. They didn’t intend to stop there, however, as they wanted the truck to feel as “normal” as possible, so they began weighing out further important options.

But first, the Apache’s chassis would briefly go under the knife. A front TCI coilover suspension setup complete with disc brakes quickly gave the Chevy better handling abilities from the jump. A set of 15×7 Voxx Rally style wheels were bolted up to give the truck that classic styling the guys at Conductive were after. Next, the factory engine was yanked, and the frame was outfitted with custom mounts and brackets to house the upcoming EV power source.

A NetGain HyPer 9 electric motor now takes up residence underneath the hood. At first glance, one does wonder if that’s all that is necessary to power the truck. Of course, an electrical system like this does rely on an assortment of accompanying components, which the guys felt better stealthily stashing in an old toolbox in the bed instead of cluttering up the engine bay.

Next was the matter of figuring out the rest of the Apache’s drivetrain, although a direct-drive system was never in the running of being included in this build. The Conductive crew was far more interested in utilizing a conventional 5-speed transmission to allow the driver to shift through the gears, which would greatly help maintain the true driving experience associated with vintage truck.

The use of a transmission adapter plate made this possible, and the result makes for a truck that is exciting to whip around the track without the sound of a fuel thirsty high-performance engine.

In the end, the truck the guys now refer to as the E-Pache stands as a different type of EV—one that can satisfy the demands of modern classic custom truck builders while ensuring a certain future for all those “old” vehicles in need of saving. With more electric conversions on the road with way more on the horizon, it’s safe to say that there is a straightforward path to excitement-inducing plug-in power. The term “EV” doesn’t automatically have to equal “boring”—nope, not anymore.

While saving money at the pump is part of the reason to go electric, Shane Rolph, the general manager of Conductive Classics, finds that EV conversions will be the long run answer to preserving more classic vehicles in the future.

To do their part, Conductive Classics is now offering electric swaps in any vehicle of 1975 vintage and older. Every swap is different, as systems are built to order to meet desires regarding power output, drive range between charges and more at a starting price that can fit into more projects than you might think.

“We have found that EVs are extremely complex yet so much more simple overall,” Shane says. “Along the way, we have dealt with frustrations of chasing down accurate wiring diagrams, but through research we have learned easier ways to get these electric conversions down to a process that works well for us.”